Making a Difference as a Volunteer and Clinical Leader 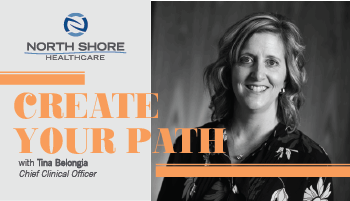 We are honored to have an incredible team of nurses throughout all of our centers at North Shore. We couldn’t be more proud of the leader of our clinical team, Tina Belongia. Today we take time to learn more about Tina and how she created her path to becoming the Chief Clinical Officer for North Shore Healthcare.

Tina started volunteering at her local nursing home in Eveleth, MN when she was in the sixth grade. She would paint resident’s fingernails, play piano for them, and help serve cookies and coffee to the residents. Tina found she loved visiting with the residents. Her best friend’s mom was an ER nurse and she talked Tina into becoming a nurse, so right out of high school, she started LPN school and went to work at the other nursing home/community hospital in town while she went onto RN school. Tina worked all through RN school. Tina recalls, “I remember taking my RN boards – had to drive three and half hours to take them. It was two days of in-person testing. We were allowed to have a Kleenex, pencils and an ID on the table! I was the first to finish and I swore I must have missed an entire section on the test! It took many weeks to get my results back so I had one schedule with me as an LPN and they did another schedule with me if I passed my RN Boards. The wait was awful. My starting wage as an LPN was $6.97 an hour and when I passed my RN it jumped to  $12.02! I remember practicing starting IVs on my Director of Nursing as I never started one on a real person in nursing school. She let me poke her over and over!”

Tina decided to take a few years to work in a hospital setting and then returned to long-term care as a Unit Manager, because she realized she missed the residents. From there, Tina was promoted to Staff Development Coordinator and then ADON. Then she took a DON position (still up in Northern MN) – thinking, after all, it couldn’t be THAT HARD, could it?  (little did she know!)

One day, a recruiter cold-called her and asked about a building in OshKosh, WI and because Tina’s extended family lived in Sheboygan, she half-jokingly replied “if you ever find something in Sheboygan, WI, let me know.”  Little did she know that when you say something like that to a recruiter it’s like GOLD! Tina believes that recruiter must have called all the centers in Sheboygan because about 2 weeks later she called and said she had a Center in Sheboygan looking for a new DON and was hoping Tina was interested. That was in 2002 and the building was Sheboygan Progressive (one of North Shore Healthcare’s current centers)!  Tina’s Regional Nurse was Leslie Scheid and she learned so much from Leslie. She taught Tina how to balance the many demands of being a DON in a multi-level company where everyone has something for you to do and everything seems to be a priority!

After Sheboygan Progressive, Tina worked as a Regional Nurse for Kindred and Extendicare and eventually was promoted to the Corporate Director of Clinical Operations until Extendicare was sold. Then, she started her own post-acute care consulting business and also worked for WHCA/WiCAL as the Director of Quality Advancement and Regulatory Affairs prior to coming to North Shore.

Tina states, “I think what attracted me most to North Shore was the focus on doing the right things for the right reasons – our residents. With all of our rules and regulations, we cannot lose sight of why we do what we do!

“I’ve worked with incredible people over the years and what I’d like people to know is that you have to be the BEST OF THE BEST to work in long-term care. There are so many different career options in long-term care and each and every person is able to make a difference in the lives of the residents. But, you’ve got to be able to think on your feet, work as a team, do a lot with a little, and be prepared to have your heart ache over and over, because we get attached and the residents become like family! If you aren’t ready for that challenge, go work somewhere else, but if you are ready – – have we got a career for you”